Latest:
15 Products That Make Retired Life Better RIMS' new president shares what makes her stay in risk management What is a Safe Withdrawal Rate? 5 Questions To Ask Yourself About Your Retirement Finances

Survey: Over 50% of Parents Opt for Chore-Driven Allowance for Kids

An allowance can be an amazing way to start teaching your children about money management. However, there’s debate when it comes to how much allowance to give, when to start giving an allowance, and whether the amount of allowance for kids should be tied to chores. Not to mention, some parents don’t believe in allowances at all.

So, we wanted to learn more about when and why parents start giving their kids allowances. So, we surveyed 1,000 Americans to find out what parents think about giving their children an allowance, how they determine allowance amounts, and whether allowance should be given just like their love—unconditionally—or earned based on behavior.

Before diving into these findings even further, a helpful baseline would be how much allowance do parents typically give by age. According to a 2018 Rooster Money survey, the average allowance by age is as follows:

Now, without further ado, our findings on parents’ impetus for giving allowance for kids.

Most Parents Start Giving Kids an Allowance by Age 12

We asked parents what age they started giving their child an allowance. We also gave the option for people to indicate if they don’t give their children allowances at all.

The majority of parents we surveyed were on board with allowances. More than 3 in 4 (78 percent) of the parents surveyed said they give or are planning to give their children an allowance.

65 percent of parents think children should be given an allowance by the time they’re teenagers. We also found that most parents answered that ages 7–9 and 10–12 were the most popular age ranges for kids to start getting an allowance.

Despite studies showing that kids can start to learn the value of money around ages 5–6, only 9 percent of parents indicated that they believe in giving an allowance at ages 4–6. 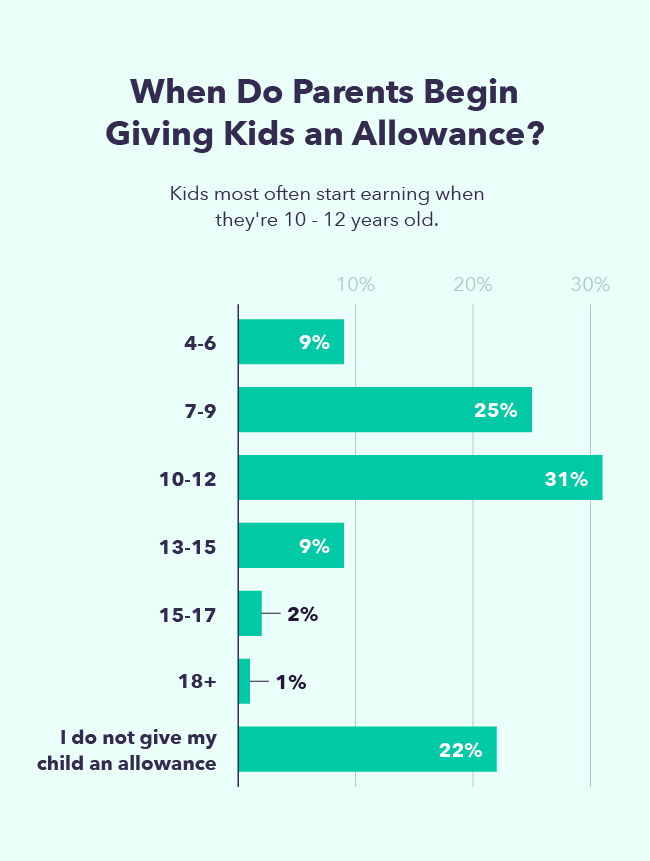 Next, we wanted to know the most important factors determining how much allowance parents give their children.

We asked parents to select the three factors that most affected how much allowance they give their kids.

The top factors that determine children’s allowance are:

Chores, behavior, and age were the top three factors. Grades came in fourth.

52 percent of parents selected chores as a determining factor in how much allowance they give their kids. While there are arguments against tying allowances to chores, it seems as though most parents are still on board with their kids earning money by taking out the trash, doing dishes, and other tasks around the house. 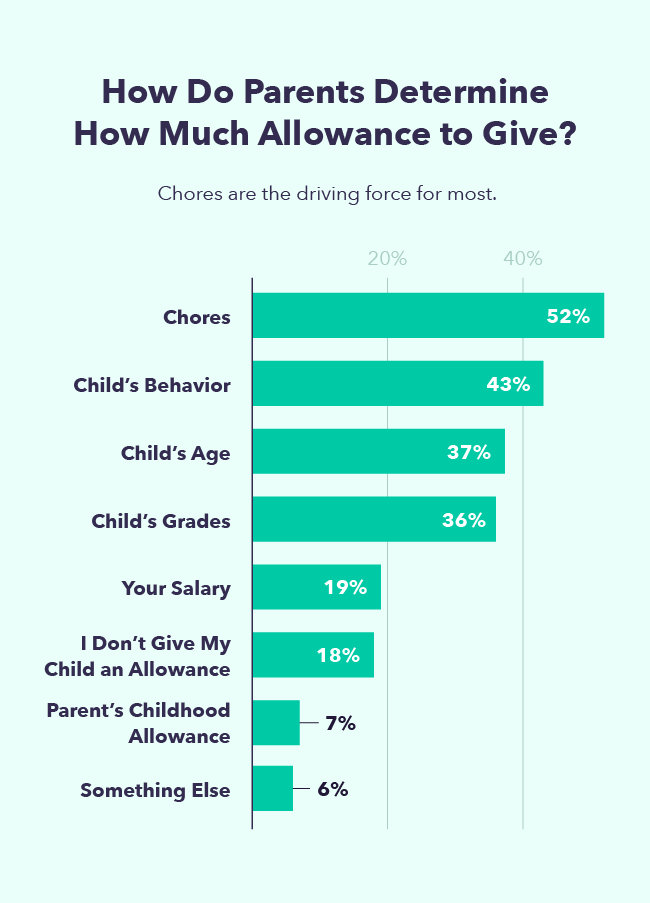 Additionally, only 7 percent of parents said that the allowance they got as children was an important factor in how much they give their children today.

Finally, we wanted to know whether parents thought allowances should be given at a fixed rate each week or earned based on whether their child meets certain expectations.

Our respondents leaned toward the expectation-based approach. 61 percent of parents agreed that allowances should be paid if children meet certain criteria for chores, grades, and behavior.

A little over a quarter of parents said they believe in children getting an unconditional fixed allowance each week. 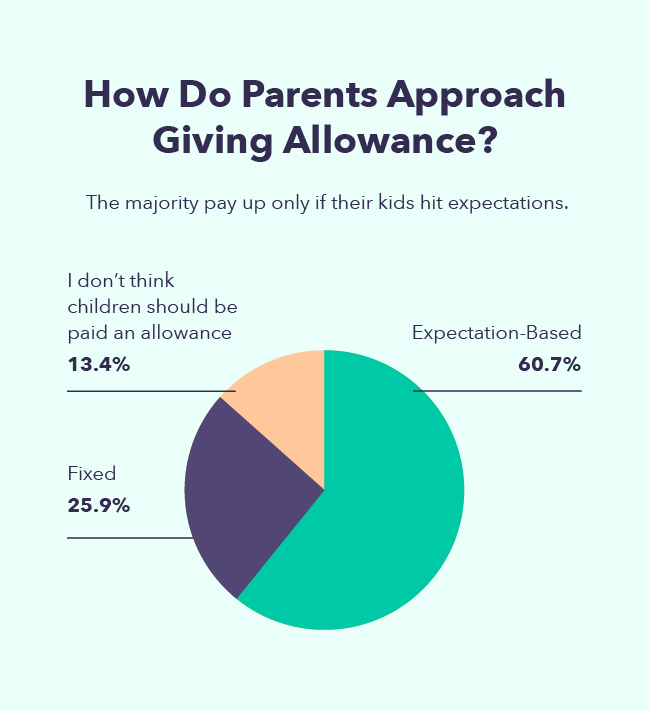 While most parents agree that allowances are important to teach kids financial literacy, a minority don’t think children should be paid allowances at all.

13 percent, or nearly 1 in 7 people, indicated that they do not think children should be paid an allowance.

Arguments against allowances often say that gifting your children money that they can freely spend can cause negative financial habits later in life.

However, when used as an educational tool, allowances can be great ways to open up conversations about money with your kids early on.

In a 2019 survey by The Association of International Certified Professional Accountants (AICPA), 75 percent of Americans said that teaching children about financial responsibility is the most important reason to give an allowance.

However, only 3 percent of parents reported that their children primarily save their allowances. Most parents said their kids spent the majority of their allowance on friend outings, digital devices and downloads, and toys.

So, while allowances have great potential as money management tools, there are educational steps you can take to make sure your children use their allowance responsibly.

You can set your children up for financial success by using their allowance as an opportunity to teach your kids about money with the tips below.

Before you start giving your child an allowance, discuss their expectations and responsibilities. If the allowance is tied to chores, good behavior, or grades, clearly let them know what you expect each week for them to earn the money.

Additionally, let your child know what you expect them to pay for. For example, while you might cover food and clothes, your child may be expected to pay for toys or video games. Lay out all expectations surrounding your child’s allowance beforehand so that everyone is on the same page.

2. Help Them Create a Budget

Sit down with your kids and help them create a monthly or weekly budget. Teaching children about simple budgeting early on will help encourage them to both track and be more responsible with their money, instead of spending their allowance as soon as they get it. If you have a teen, you can help them develop a more complex budgeting strategy to set goals and grow their money.

Talking about budgeting strategies early on will help set them up for success and develop ways to effectively balance life and budgeting as they get older.

For younger kids, you can help them start to understand the difference between needs vs. wants when creating their budget. Use the printable activity below for kids ages 5 to 10. 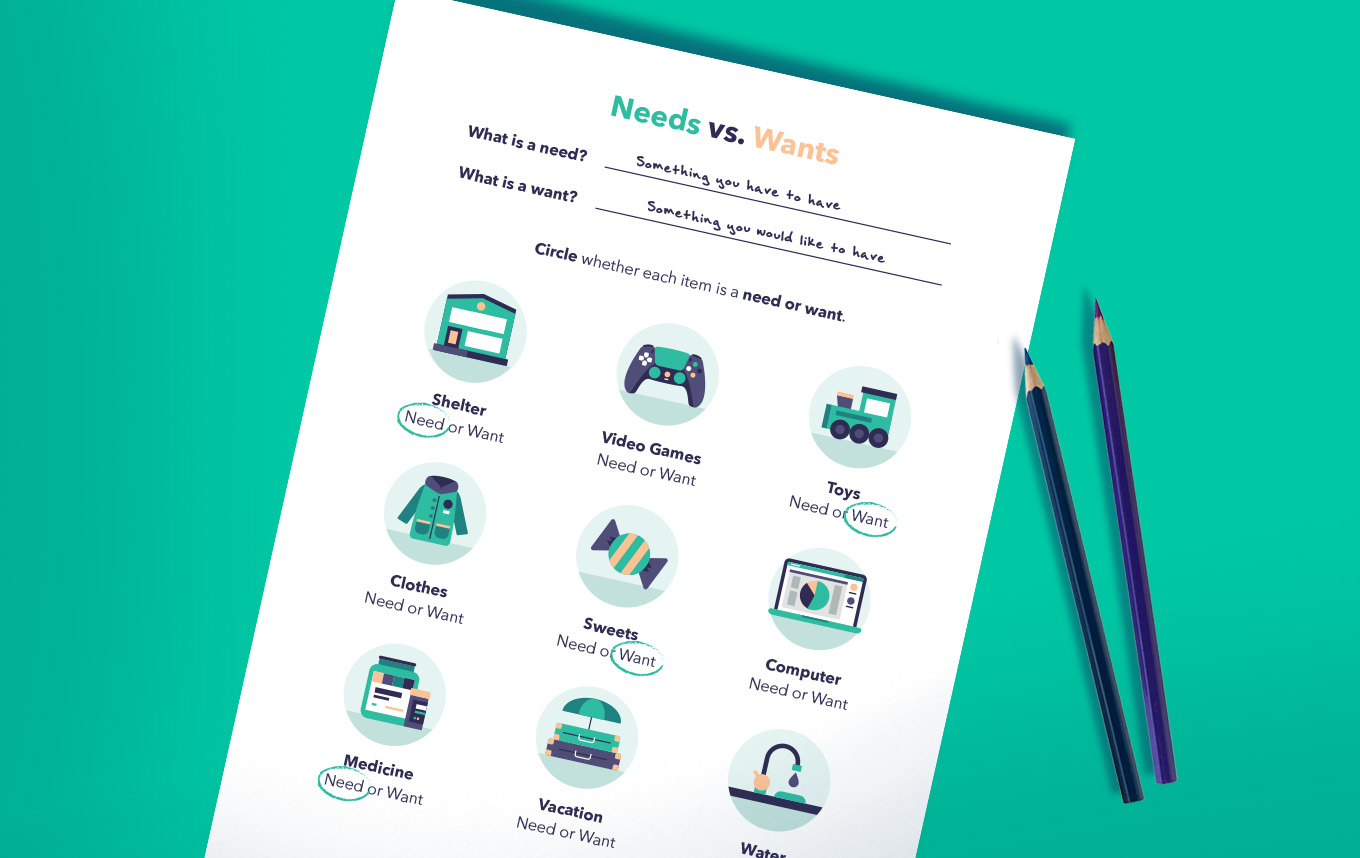 3. Encourage Them to Set Aside Savings

To emphasize the importance of setting aside money for savings, have your kid set a savings goal for something they want. Then, help them determine how much to set aside each week to reach that goal.

You can also help your child open a savings account. Whatever your method, it’s a great idea to get your kids involved and excited about saving. 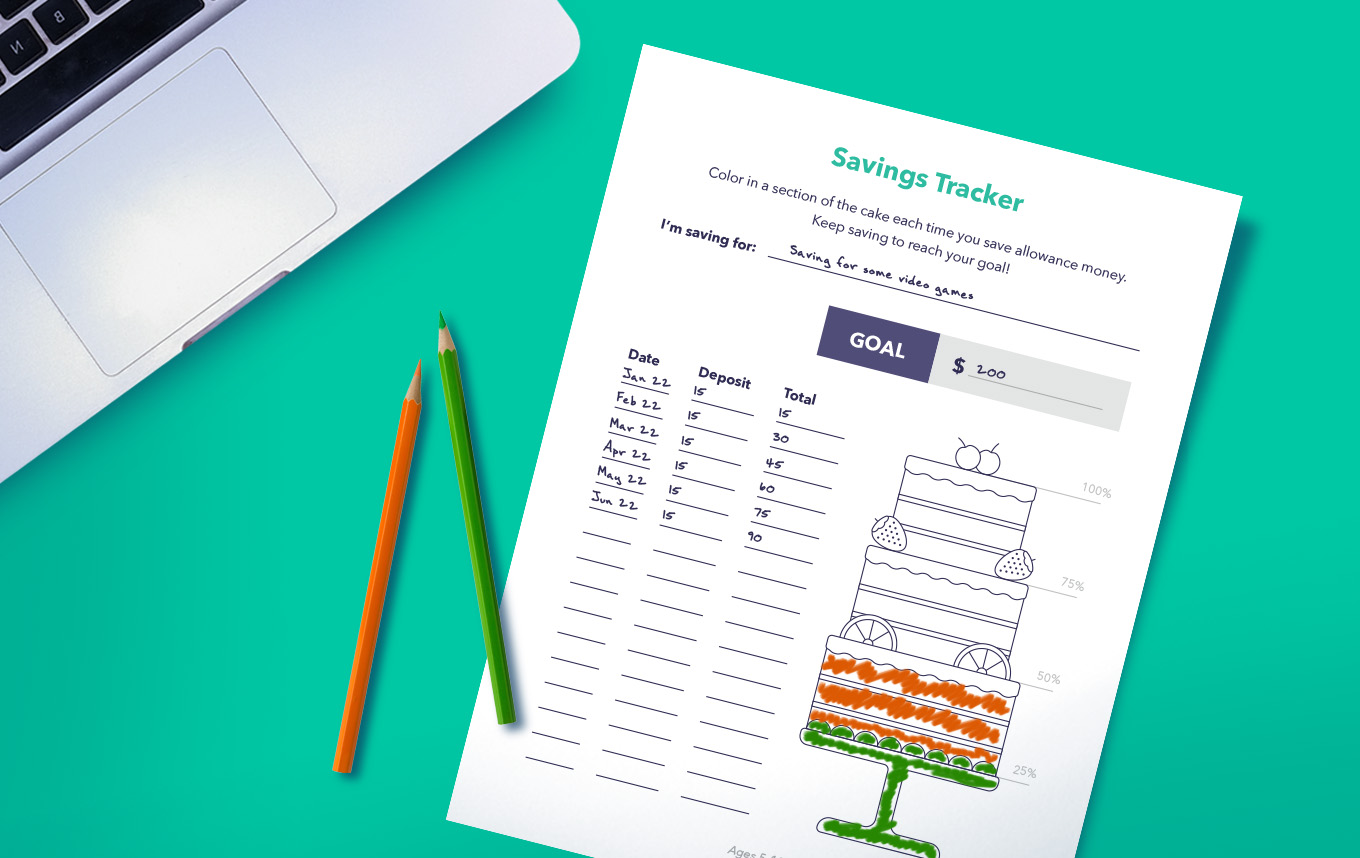 Some parents like to teach the “spend, save, give” approach. Encourage your kids to save one-third of their allowance, give one-third of it to a charity of their choice, and keep the rest as spending money. Or, you can work with them to land on a different breakdown based on their goals.

To help children track how much they are spending, saving, and donating each month, use this printable chart below. 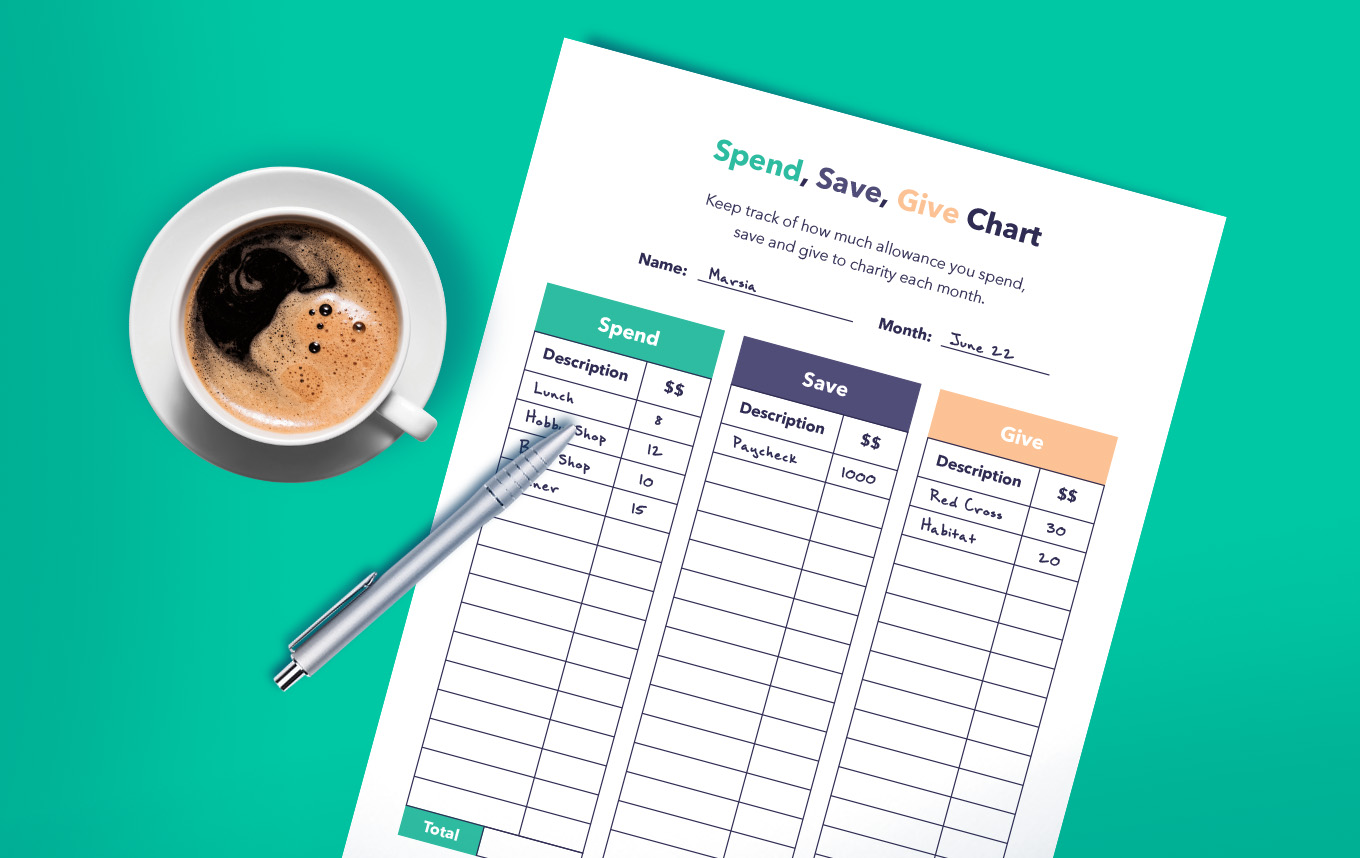 Here are answers to some more common questions about allowance for kids.

How Much Allowance Should a Child Get by Age?

When Should I Start Giving My Child an Allowance?

Some children aged 5–6 are ready to start grasping the concept of money management, but you will know best when your child is ready to start receiving an allowance.

Should I Offer a Repeated Allowance?

There is debate around repeated allowances. Many parents tie allowances to chores, while others believe chores are expected family duties and shouldn’t be tied to money. A repeated allowance can be a good tool to help teach your children about saving money. You can also opt for a blended approach, where kids receive a base allowance each week but can earn more by helping out around the house.

Should Kids Get an Allowance?

An allowance is an excellent tool for teaching children about financial responsibility. But just giving the allowance on its own might not be enough to teach kids about money. It’s best to use your childrens’ allowance as a way to open up conversations about money and saving to help your kids develop good money habits throughout their lives.

Gauging people’s thoughts on allowances for kids gives us a glimpse into how families are starting financial education with their children. Ultimately, however, whatever allowance system works best for your family will be what’s right for you and your children.

This survey was conducted on YouGov Direct for Mint.com. One thousand U.S. adults 18+ were interviewed from March 11, 2022 at 7:48 p.m. to March 12, 2022, at 5:08 a.m. Eastern time. Data is weighted on age, gender, education level, political affiliation, and ethnicity to be nationally representative of adults 18+ in the United States. The margin of error is approximately 3.1 percent for questions 1 and 3, and 3.7 percent for question 2.

This article was originally published by Intuit.com. Read the original article here.
Previous Post What was the most frequently occurring natural peril in 2021?
Next Post Am I Still Bullish or Ready to Cash out? | Stock Market Collapse

5 Questions To Ask Yourself About Your Retirement Finances

What is a Safe Withdrawal Rate?

Rawpixel.com / Shutterstock.com Want to make the most of your retirement? We don’t blame you! From a handy retirement…

5 Questions To Ask Yourself About Your Retirement Finances

What is a Safe Withdrawal Rate?