What is a Recession? (Are We in One or Close to One?)

For many, the idea of a recession can be extremely unsettling. In fact, it’s been a little more than a decade since Americans faced one of the worst recessions in history: The Great Recession of 2008 that was fueled by the collapse of the housing market. Now, with the coronavirus pandemic upheaving economies across the world, many may be wondering whether we’re experiencing a recession now.

Throughout this post, we’ll dive into the intricacies of important questions, such as “what is a recession?”, “what causes a recession?”, “what happens during a recession?”, and more. For a full scope on recessions, including warning signs and whether they can be predicted, read end-to-end. Or, use the links below to jump to a section that might contain an answer to one of your recession-related questions.

What Is a Recession? The National Bureau of Economic Research is the governing body that officially declares recessions and includes the following three criteria in their recession definition:

When it comes to identifying a recession, these criteria can be interchangeable, as long as each criterion is met to some degree. For instance, an extreme event can significantly offset weaker indications, which can be seen today.

Are We in a Recession?

In a recent NBER statement, they claimed that yes, we are currently in a recession. This is due to the unprecedented magnitude in unemployment levels and production (depth) that resulted from the COVID-19 pandemic, paired with its broad reach across the entire economy (diffusion). While the duration is far weaker than depth and diffusion, the magnitude of the depth and diffusion of the current economic downturn classify the economy’s current state as a recession.

NBER’s recession definition focuses closely on diffusion. In order for a recession to be declared, it must influence the economy broadly, not just a single industry. For example, if the auto industry experiences sharp declines in production, but other industries within the economy continue to perform well, a recession can’t be declared.

The recession definition in economics uses real gross domestic product (GDP) as the best measurement of economic activity, which is measured in two ways by the Bureau of Economic Analysis: the product side (GDP) and the income side (gross domestic income (GDI)). NBER considers both product and income equally and uses these indicators to determine the months of peaks and troughs. NBER will also look at additional indicators when determining peaks and troughs, such as:

However, these indicators are given less weight than GDP and GDI, but provide NBER with more supplemental information when deciding whether the economy is doing well or poorly.

After the Industrial Revolution during the 1700s and 1800s, a majority of countries across the globe experienced a long-term macroeconomic trend of economic growth. However, when you look at the long-term growth over the past few centuries, you’ll notice a few dips along the way. These drops in economic activity are short-term fluctuations that indicate slowdowns in the economy, which can last anywhere between a few months to a few years before returning to the long-term growth trend.

What are these dips? These dips can be either a recession or, in worst-case scenarios, a depression. So, what’s the difference between a recession and a depression? From our recession meaning in the previous section, recessions are characterized by a significant decline in economic activity that spans across the economy for a few months.

Depressions, on the other hand, are similar to recessions but differ in severity. Depressions are characterized as an extreme recession that lasts three or more years or results in a decline in GDP of at least 10%. While less common than recessions, depressions bring about high unemployment rates and low inflation, which leads to an economic shutdown.

In the history of the United States, there have been roughly 50 economic recessions and one depression, dating back to 1785. Of these periods of economic downturn, some recessions proved to be more drastic than others, and each one had its own set of factors that lead to a drop in economic activity. 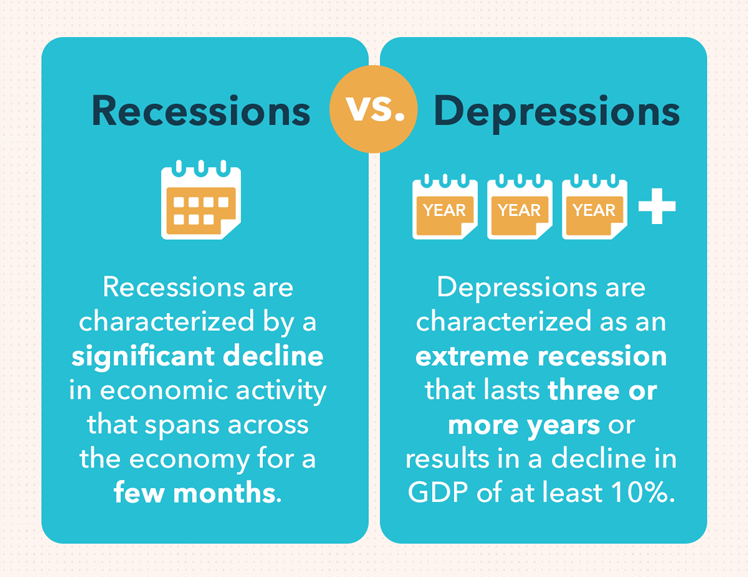 As you can tell, recessions aren’t all one and the same, which means different causes can set one off. From sudden economic shocks to advances in technology, these are just some of the common causes that can lead to a recession.

What Are Warning Signs of a Recession?

Recessions aren’t always predictable. If they were, governments would work hard to prevent them in the first place. However, there are a few warning signs that can lead to a recession. Knowing these warning signs can even help you understand how to prepare for a recession, so you aren’t left struggling to make ends meet when the economy plummets. Take a look at these top warning signs of a recession below: Can You Predict a Recession?

As you might be able to tell, you can’t always predict a recession. Take today’s current state of affairs, for example. No one could have predicted the COVID-19 pandemic spreading across the globe, shutting down economies from every corner of the world and leaving millions of workers out of a job. However, using the warning signs mentioned in the previous section, such as increasing unemployment rates, an inverted yield curve, and a decline in consumer confidence, you can get a good idea of whether a recession is in the near future.

What Happens During a Recession?

Recessions can be nerve-wracking for everyone, namely because unemployment levels rise across a variety of sectors within the economy, which means millions of people can lose their jobs. This can create a snowball effect where the economy gets worse and worse before getting better. Here’s what you can expect to happen during a recession: 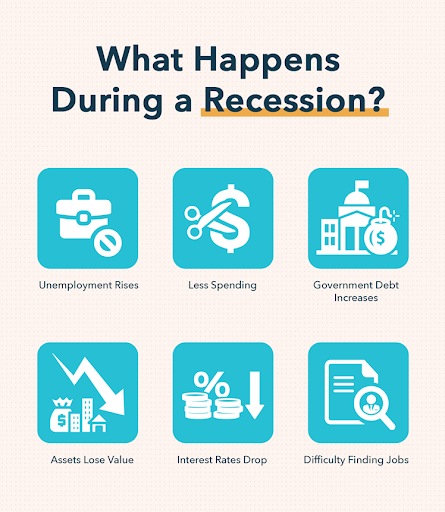 Recessions can be troubling for people from all walks of life due to their broad reach across the economy. With that in mind, it’s important for individuals and businesses to understand what happens during a recession in order to figure out solutions to get back on solid ground.

How Long Do Recessions Last?

The Great Recession of 2008 lasted about 18 months, marking it as the longest recession in American history. However, the other ten recessions post-WWII only lasted between six and sixteen months, showing you just how different each recession can be, according to NBER data. The Great Depression, on the other hand, was much more severe than any other recession in American history. The Great Depression lasted between 1929 and 1939, with the worst years falling between 1929 and 1933, where unemployment levels rose to 25%, and GDP fell by 30%. 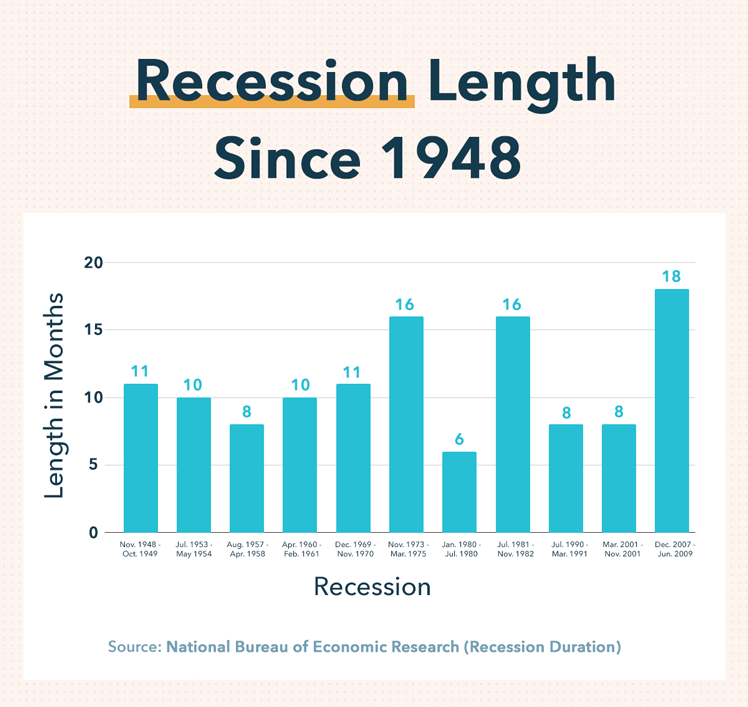 It’s important to remember that recessions are a normal part of the economic cycle. Once a recession occurs, the economy typically rebuilds itself once again—often much stronger than before the recession. However, even short recessions can have lasting effects on the economy, such as policy changes by the government and social and psychological shifts fueled by economic distress.

The Uncertainties of COVID-19 and How It Impacts the Market

In their recent statement, NBER announced we are currently in the midst of a recession. The coronavirus pandemic proved to be a sudden economic shock, causing businesses across the world to shut their doors to prevent the spread of this disease and consumers to shelter in place at home. These measures dealt a massive blow to the economy, with unemployment rising to 16.9 million people in July 2020. 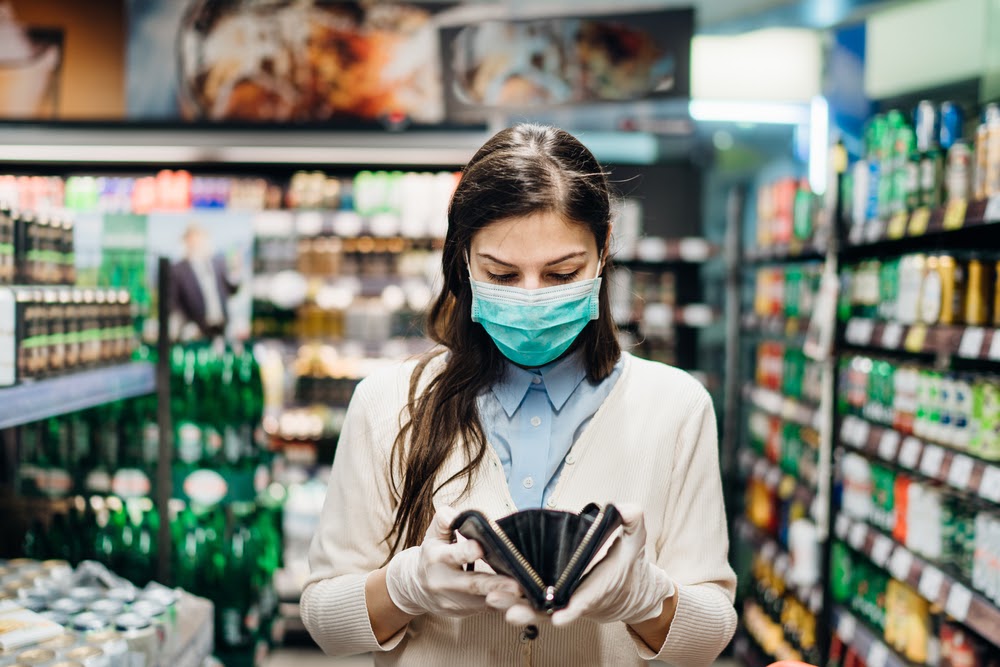 This sudden increase in unemployment and business closures resulted in the recession we’re currently in and will impact the market in more ways than one. What’s different about the current recession we’re facing is its uncertainty. Without a vaccine, and with cases spiking in countries across the globe, there doesn’t seem to be an end in sight. This uncertainty is impacting the market in several ways:

COVID-19 is impacting the market in several ways due to its uncertainty and broad scope. While we can’t predict the future or how the pandemic will pan out, we can look at how this global event is affecting different areas of the economy to devise a plan for the future.

Wrapping Up on Recessions

Recessions can lead to tumultuous times filled with uncertainty and fear. With increased levels of unemployment, business closures, and reduced consumer confidence in the market, navigating a recession can be a challenge for consumers and businesses alike. Throughout this post, we discussed various intricacies of recessions, such as how they’re caused, warning signs to look out for, and how the coronavirus is impacting the economy today.

With this information, you can make a plan to ride out this current recession, along with future recessions, to keep your finances in good health. Some tips include cutting unnecessary expenses, such as subscriptions and eating out, growing an emergency fund to help keep you afloat during financial hardships, and diversifying your portfolio by investing in a wide range of assets. At Mint, you can use our free budgeting app to help you organize your finances and create a budget that works for you.

This article was originally published by Google.com. Read the original article here.
Previous Post What Is Repossession and How Does It Work?
Next Post Understanding the Main Types of Unemployment

How To Refinance Your Auto Loan

Lifting the veil on wedding insurance

Couples need to be diligent when it comes to the security of their finances. Wedding insurance has been on…

How To Refinance Your Auto Loan